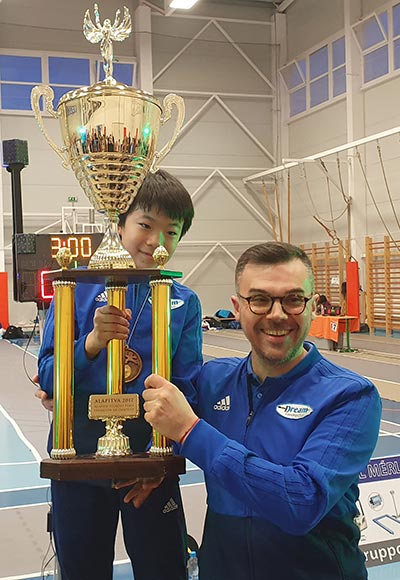 He starting fencing in 1988 and still loves the sport.

Yosif was National Champion and Winner of the Cup of Bulgaria. He was part of the Bulgarian National Squad for the cadets, juniors and senior teams.

He represent his country at the World Championships, European Championships and World Cups between 1994-2001.

In 2000 Yosif had to swap his epee for an AK47, for National Service in the Army.

After a number of injuries Yosif decided it was time to stop fencing competitively and took up coaching at Club Academic, Sofia.

In 2009, Yosif gained his International Category B accreditation from the F.I.E. and refereed a number of international competitions, including the World Cup finals in December 2009 in Lignano, Italy.

Yosif moved to the UK in 2008 and started Dream Fencing Club.

Tandridge Council awarded him the borough Sports Personality of Year 2013.

Yosif brings energy, experience, professionalism and enthusiasm to the Dream Fencing Club from which all members of the club benefit.

Yosif's lessons are highly enjoyable. Yosif teaches the correct technical approach to the sport, building the skill set of the fencer hit by hit. Yosif is expert at concentrating on the small details of technique.

Book a lesson with Yosif here.